The Power of a Photobomb

Everyone loves a good photobomb and the only thing even more hilarious is when celebrities or members of Royalty get in on the action. Yes, we may have the Commonwealth Games and England clocking up gold medals. Yes we may have those planned to a tee special and expensive events; the birthday parties, the weddings, the christenings. If truth be known the ‘oh look where I am/what I am doing/who I am with’ shots will never really be remembered or valued more than just a reference point. The images that we will really look back on will be those shots that went slightly awry by an unexpected head, arse, bottle, fish, whale, camel even that intrudes on the shot and rather than spoils it makes it – well just that bit more interesting. It will be those images that convey not a pose or a pout but that moment of almost brutal honesty.

First roll of honour goes to Her Majesty the Queen for photobombing two members of the Australian hockey team as they posed for a selfie. Not to be outdone Prince William’s photobombing came as he visited the athlete’s village in Glasgow with the Duchess of Cambridge. Olympic Photobombing technique runs in the family as Prince Harry was the next to make an unexpected guest appearance in the photo at the Tollcross International Swimming Centre.

Unfortunately for me I have yet to have a photobomb experience with the royal family but what I have got is one heck of a beautiful moment that occurred recently at a wedding I was shooting and is nevertheless an image I will treasure as much as the family I was shooting for. So there I am taking reportage style shots and to be honest I am really in my groove; the family is one of those types where they make a laugh and a giggle out of everything, the people in the registry office are really accommodating so I have free reign. When I shoot at events like this I am always clicking the camera often because you never can tell when the next incredible moment will happen. Anyway it's going well, I am taking some shots of the newly married couple signing the book, just getting the focus ready and literally just before I take the shot the Bridesmaid; this adorable five year old girl with bright red hair and freckles runs up to the table and looks straight down the lens. Click goes the camera, priceless. I look on the back of the screen and amazingly the bride and groom are looking straight at her laughing. This shot remains one of those images I think I will never forget. 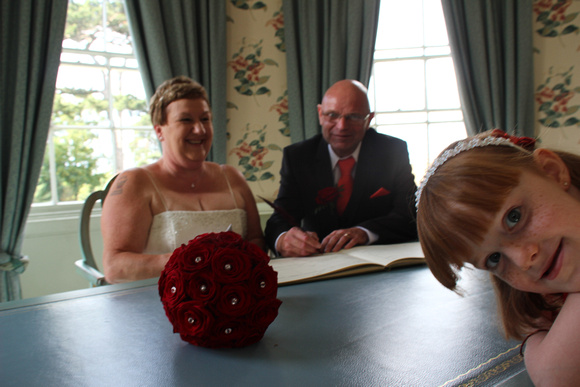